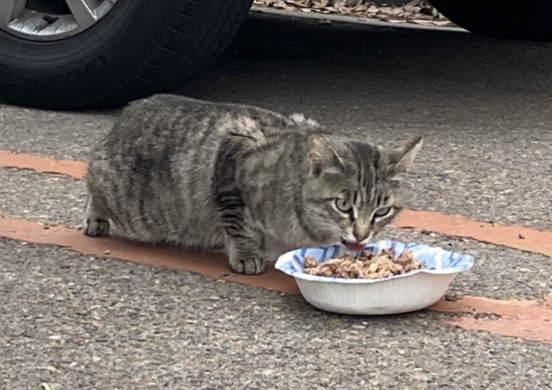 For many students, seeing the furry face of a campus cat is a fun little treat going to and from classes. I mean, can you really be sad when one of those curious kitties pokes its head from the bushes? At this point, Point Loma Nazarene University’s mascot might as well be the feral cats or even the racoons instead of the sea lion (I don’t know about you, but I’ve never seen one of those on campus before).

Besides looking adorable, these feral felines have a wild side. Studies from the National Institute of Health estimate that free-ranging, domesticated cats kill billions – yep billions – of birds and mammals annually, and unowned cats, as opposed to outdoor cats with owners, cause the majority of these killings.

Mike Mooring, a biology professor at PLNU, has been collecting information on local wildlife for more than 20 years from student projects in his conservation ecology course. His most recent findings from camera trap studies in 2018 and 2019 suggest cats and racoons to be the most common animals both on campus and in the surrounding undeveloped areas, while mice and other mammals seem to be scarce. This aligns with data from student live-trapping studies conducted in Flex Canyon since the 1990’s that show a pattern of declining rodents.

“These trends would indicate that the local wildlife community has been changing,” Mooring said.

Mooring added there is no concrete scientific evidence to conclude cats are a direct cause of the decreasing biodiversity; however, he speculated that the presence of cats in recent years, along with droughts and the university’s pest control measures could all be factors in changing the wildlife populations. Even if the presence of these cats does keep the number of rodents down, Jeff Bolster, vice president of university services, said the cats are not part of PLNU’s pest control measures. Rather, they use Orkin for preventative and responsive pest control in the dorms and other buildings.

Mooring noted that the presence of feral cats on the PLNU campus is a reflection of invasion of natural habitats by non-native species as a result of human development.

“I’m always in favor of biodiversity and having a lot of natural wildlife in our environment,” Mooring said. “Cats cause problems because they’re predators and are known to kill native rodents and birds.”

Currently, Jim Gaupsas, a Point Loma local who helps the university maintain the cat population, said there are 15 cats he knows of on campus.

“The cat population…has diminished by around 7,” Gaupsas said in an email. “A couple got hit by cars…One long timer kept wandering off for a few days and eventually never came back.”

Gaupsas has been coming to campus every day, rain or shine, for the last three and a half years to feed different groups of cats in various locations on campus: at 2 p.m. he visits Nease Hall, at 6:45 p.m. he heads to the Bond parking lot and then down to campus facilities shortly after. Even during the height of the pandemic, the feral felines never missed a day of feeding.

The goal is to feed the cats and then pick up the food so other animals and pests don’t scavenge for the leftovers. The habituated feedings also give Gaupsas an opportunity to humanely trap new feral cats and take them to a Feral Cat Coalition clinic to be neutered. After the surgery, most are returned to campus to live their wild lives, while the more friendly cats are sometimes adopted. While neutering the cats puts a check on their population, new cats can still wander onto campus. In order to avoid confusion, the neutered feral cats can be identified by a clipped right ear, so they’re not confused with feral cats who are not neutered.

Gaupsas said he is thankful for the students who express interest and gratitude for the cats and their well-being.

Emma is a newer member of the PLNU cat community. Gaupsas noted she’s still very feral and will likely hiss or scamper off if you get too close. She can be found around the Bond building. After eating, she waits for Gaupsas to “walk her home” — from a distance — to the bushes by Caf Lane.

Iris is a little lover, according to Gaupsas. She’s shy at first, but willing to get to know you if you take the time. She tends to hang out near the Bond Academic Center building. You’ll know her by her baby blue eyes and short striped tail.