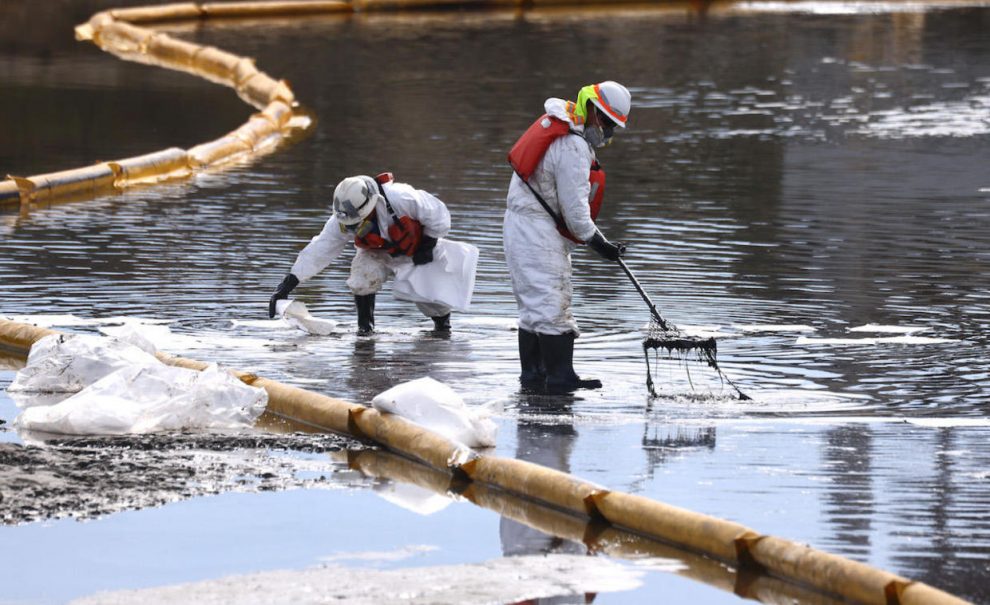 Early estimations announced that 144,000 gallons of crude were released into the ocean off the coast of Huntington Beach on Oct. 2. The spill has affected Newport, Laguna and Huntington beaches. New estimations by the U.S. Coast Guard show that the spill is much smaller than originally thought.

As stated in the LA Times, “U.S. Coast Guard Lt Cmdr. Scott Carr said the agency is confident the number of gallons leaked is around 25,000, based on scientific data and years of handling such spills.”

A statement released by The City of Huntington Beach said, “We have confirmed that the company responsible for the oil spill is Beta Offshore, a California subsidiary of Houston-based Amplify Energy Corporation.”

An alarm sounded early Saturday morning, warning of a possible failure, but the pipeline was not shut down until an estimated three hours later. The FBI has joined the investigation to examine the negligence surrounding the spill.

CBS Los Angeles reported, “Attorneys representing several beach businesses in Orange County announced on Oct. 7 that they’ve filed a class action lawsuit against Amplify Energy and its subsidiaries for the financial loss suffered following the oil spill off the coast.”

The spill aggravated the coastal traffic jam from pandemic import delays, and demonstrated the risks of keeping ships in port much longer than they should be.

This week, President Biden addressed the national delay of goods by pushing for 24/7 operation of the Ports of Los Angeles and Long Beach. An Oct. 13 statement from the White House said, “These two ports are the point of entry for 40% of containers to the U.S., and are on track to reach new highs in container traffic this year.”

Micheal Gartland, a fourth-year environmental science major, Huntington Beach local and Point Loma Nazarene University’s Students for Environmental Action and Awareness (SEAA) Club vice president, happened to be home for the weekend of the spill. Gartland quickly made his way to the beach early Saturday morning to see the damage.

“You could see the solid globules of oil in the sand all across the coast. As soon as you hit Pier Plaza, you could smell it and then obviously on the beach it’s even worse,” Gartland said.

Gartland examined the area, taking in the scene which he so often heard of on the news but never experienced for himself.

“Just seeing this industrial thing being the cause of so much harm – it’s just sad,” said Gartland.

While immediate efforts following an oil spill can remove visible pollution, a rapid loss of organisms like birds and fish and larger marine animals will have long-term effects.

Walter Cho, marine biologist and professor of biology warns of the lasting danger of remaining oil products in the environment.

“If they [oil products] settle out or they come up onto beaches, they tend to persist there and stay there a long time and then over time they continue to leach out these chemicals, which can be poisonous for a lot of animals,” said Cho.

According to FracTracker Alliance, the number of permit approvals as well as permit applications for drilling new wells have dropped, but by no means have they halted.

“I’m not even sure many Californians even know that we have drilling platforms off our shore,” Cho said.

The oil spill may bring a newfound awareness of the presence of these rigs and how they “have the potential to be damaging and have catastrophic effects on the environment right along our coastline.”

Cho described the many stakeholders involved within the issue of climate change that bring their opinion into the conversation.

“I think that is the danger and the unfortunate aspect of our discussion of climate change is that it has become so highly politicised when it shouldn’t have been. Once it has been politicised, it’s hard to pull back from there. But the science is not going to change,” Cho said.

Gartland said, “But I feel like even if someone on the conservative right side said a good idea, they wouldn’t listen just because they’re on the other side of that imaginary line that’s splitting our country apart.”

Gartland poses a number of questions surrounding the continuation and worsening of the climate crisis. “The large umbrella question – why are we still doing this?” Garland said.

Cho advised educating yourself, speaking out on environmental issues, and practicing environmentally conscious habits like reducing single-use plastics, recycling, reducing energy consumption and being a careful consumer. He prompts students to assess information objectively and on their own terms, without becoming influenced by politics.