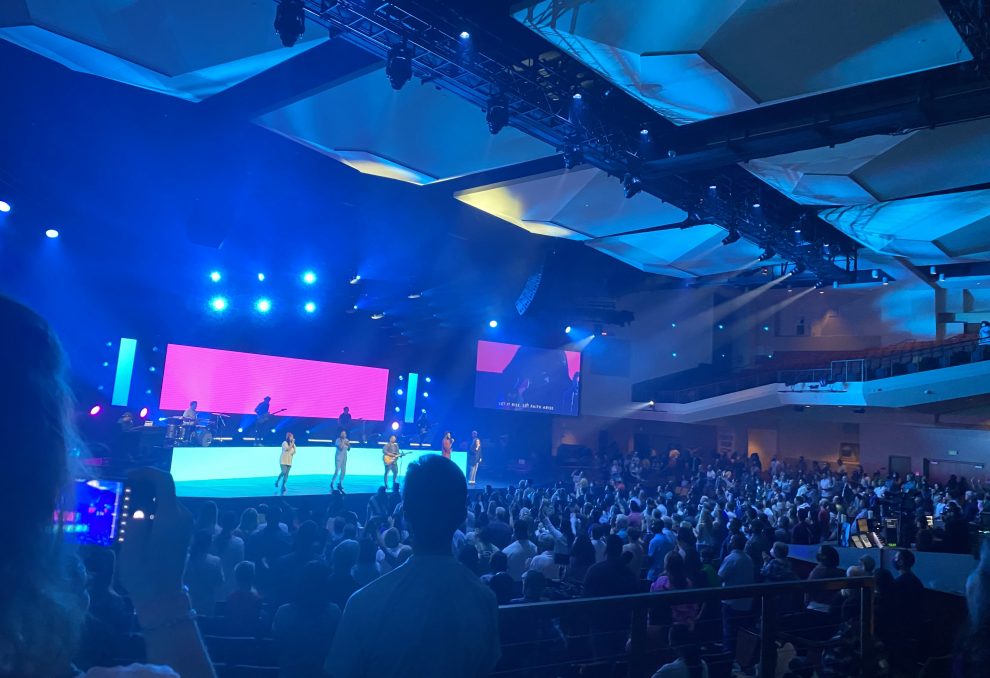 The Rock Church held its first indoor service on Sunday, April 18 at 10 a.m. after 13 months of only online and outdoor services during the pandemic. The megachurch’s Point Loma campus placed no capacity limits following the latest Supreme Court ruling. As a result, California’s public health officials cannot impose mandatory restrictions on places of worship. The Rock’s other major campuses — with the exception of their San Ysidro site — followed suit in holding indoor services at 10 a.m. and 12 p.m. as well.

The decision to hold indoor services came on the heels of a different Supreme Court ruling on Feb. 5, which determined California could not put a blanket ban on indoor religious services. The court initially allowed the state to retain capacity limits, however.

On Sunday, attendees nearly filled the lower levels of the Point Loma 3,500-seater sanctuary by the time service began. There were few seats empty in the front and middle sections, with fewer attendees occupying seats in the upper levels. According to the church website, all members of the congregation are required to wear masks upon entering the building, but have “the option to remove it as you sit and worship with your family.”

Point Loma Rock Church attendee, Eva Sanders, said she was hesitant to go to church indoors since she knew some fellow church members would not wear masks in their seats. She said she decided to come anyway and sat in the far left corner of the sanctuary so she could social distance as much as possible.

“Some things you can’t control,” said Sanders. “Life is going to go on and I try not to live in fear.”

During his message, Rock Church Pastor, Miles McPherson, encouraged members of the congregation to attend the service in the way that’s most comfortable for them. Rock Church still continues to have online services at 8 a.m., 10 a.m., 12 p.m. and 6 p.m.

Despite being allowed to have indoor services at a limited capacity since February, Point Loma Rock Campus Pastor, Travis Gibson, said the church took its time preparing for indoor services.

“We’ve been planning for over two months,” Gibson said. “Looking at drawings, looking at seating charts, different cleaning solutions and making sure we have them.”

Gibson also noted he was happy to be back indoors, because unlike outdoor sermons, planes taking off from the San Diego International Airport can’t fly overhead and interrupt the speaker every few minutes.

What Anti-Maskers Say to Me, What I Say and What I Want to Say
Making the Most of Mental Health Days