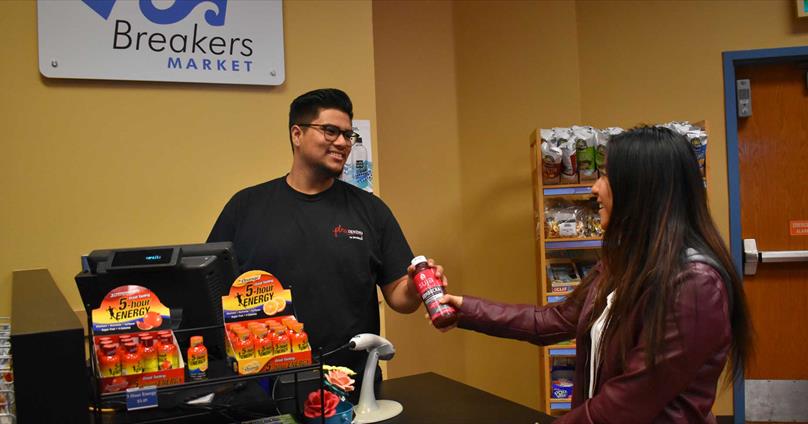 Updates to Breakers Market are scheduled for completion by the end of February. The renovations will include new decor, coolers, products and even a nacho machine. Recent updates include wellness merchandise like shampoo, over-the-counter medications and feminine hygiene products, which can be found at the front counter of Breakers Market.

Changes are common at Breakers Market and Point Break and can occur both semesterly and annually, according to Erick Cubero, Sodexo’s retail dining manager at PLNU. At the start of the fall 2019 semester, Sodexo brought new, healthier beverages and snacks to Breakers Market while increasing prices at Point Break.

For students who are unhappy with Point Break’s current menu offerings, Cubero suggests reaching out to Sodexo managers, all of whom can be found through the PLNU dining site. Zaida Pena, a senior nursing major and former Point Break employee, suggested to Cubero that they add acai bowls to the menu, an idea implemented last year.

“I realized that people who don’t have cars or a way to get off campus easily would probably appreciate being able to get acai bowls at school,” Pena said. “I was just brainstorming and throwing out ideas during one of my shifts.”

Now, acai bowls are one of Point Break’s most popular items. Pena encourages other students to get involved.

“Speak up. Throw out ideas,” she said. “Everyone that works here is doing their best at their job. Sometimes they don’t have a say over what is on the menu.”

The annual price hike on Point Break’s menu is due to a number of factors. “The vendors increase their prices, minimum wage goes up and it’s going to keep going up,” Cubero said. “We use all eco-friendly, compostable items, and those are expensive.”

For students to save some money, Cubero suggests they bring their own containers to Bobby B’s. Coffee is only $.99 if you bring your own cup.

“Compostable is good, but reusable is better,” he said.

Price increases at Point Break are also not directly related to meal plan payments. According to the PLNU website, the default meal plan for residential students is 15 meals per week and $50 dining dollars, which costs $2,325 per semester.

“All the money that you guys pay for a meal plan doesn’t go to Sodexo. That money goes to the school, and the school divides that in different areas,” Cubero said.

To contact Sodexo’s PLNU team, go to plnudining.sodexomyway.com/contact. Be on the lookout for news regarding the “grand reopening” of Breakers Market within the next month.