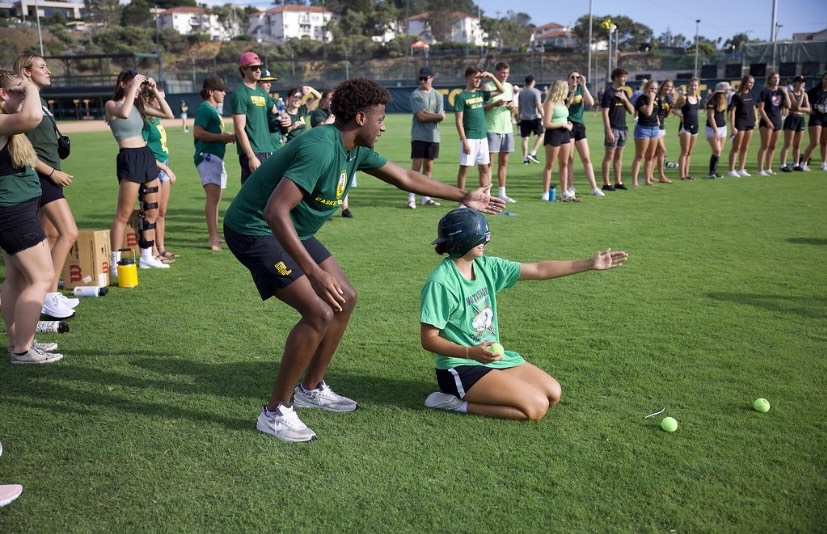 Point Loma Nazarene University hosted its third annual Student-Athlete Opening Day on Sunday, Sept. 11. Opening Day is a time for all PLNU student-athletes to come together to get to know one another and hang out together.

“Opening Day has quickly become one of our most highly anticipated events of the year among our student-athletes. Opening Day is a celebrated event that allows us to kick off the school year as a team,” said Athletic Program Coordinator Kelsey Coughlin, who oversees the event.

Community is often cited as one of PLNU’s most admirable qualities by students and staff alike. Opening Day helps this community to be built within the campus’ subgroup of student-athletes and athletic staff.

The opening speeches provide insight, encouragement and information about the goals of the athletic department and the athletic teams. Student-athletes not only hear from staff members, like Athletic Director Ethan Hamilton; but they also hear from their peers. This year’s speakers were Grace Hicks, Austin Lavell and Rachel Fong. One of the main topics of the speeches was mental health.

“It is so important for mental health to be communicated among all athletes and get the stigma that mental health is a weakness in athletes to be understood as not being true at all,” said Lavell, a member of the PLNU men’s soccer team.

The past few semesters, PLNU has been making strides toward providing student-athletes with more resources specific to their needs. This semester marked the start of a student-athlete support group where student-athletes can help each other through whatever struggles or successes they might be experiencing. The group is run by mental health counselor Carla Mack and Wiley Hall resident director Emilio Prieto through the counseling center.

After the opening speeches, the games begin. The student-athletes are split into several teams based on the color they were assigned to wear to the event. In previous years, teams were primarily aligned with athletic teams, but that did little for helping the athletes meet those on other teams. This year, the teams were determined by alphabetical order of last names, creating teams that consisted of athletes from various athletic teams.

According to PLNU fourth-year cross-country athlete Tori Michaelian, this new strategy for creating the Opening Day teams is especially helpful for new PLNU athletes and smaller teams who do not share the same places for practice as many of the other teams, think golf and cross-country.

“We always complain about how we don’t really know the other athletes so the event is good for getting visibility for our team and spending time with all the athletes,” said Michaelian.

Each Opening Day team plays several rounds of a variety of games, such as capture the flag or tank wars – a game where blindfolded players try to hit the opposing team’s blindfolded players with tennis balls while being guided by their teammates. The two teams with the most wins advance to the championship, which, this year, was tug of war.

Despite losing the first game of capture the flag, this year’s champion was Gray Team. According to Lavell, captain of the Gray Team, there was a great deal of strategy that went into their tug of war win.

“Every person on our team from every sport came together and all shared ideas on how to win. Lots of smiles and laughs were shared,” Lavell said.

At the end of the event, the Gray Team claimed their prize of first place in line for food, then all the athletes bonded over tacos and each other’s company.

“The idea of bringing a competitive nature, which is something all athletes enjoy, along with the opportunity to meet new people from different teams makes for a really fun experience,” Lavell said. “I genuinely think everyone there had a great time.”