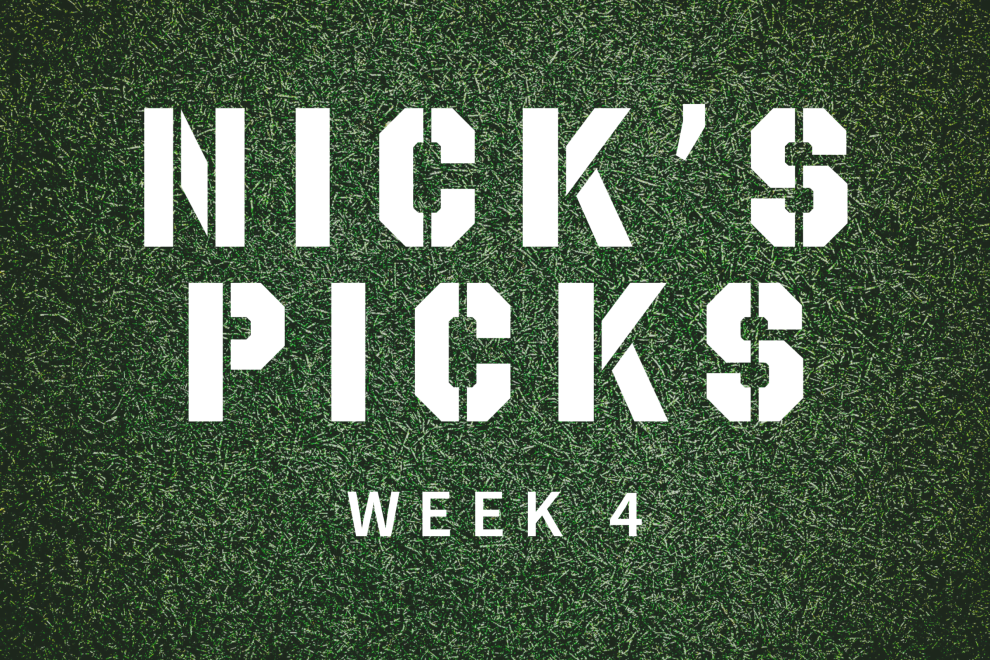 Week 3 of the NFL season was headlined with injuries. Numerous stars around the league were already sidelined from the action to begin the week, and early into the games more players went down with an injury. For those who have hurt players on their team, this upcoming week is panning out to be a rough one. However, those who still have relatively healthy line ups have the opportunity to strengthen their bench and maybe even add a new flex player since there will be plenty of breakout stars in Week 4.

Week 3’s main quarterback “sleeper” pick Jimmy Garoppolo (8.44 points), claimed that getting back on the field after being benched was like “riding a bike.” After claiming playing quarterback was all muscle memory, Garoppolo looked like he needed to be back on training wheels. The San Francisco pass thrower had one good drive to begin the game, but after that he was back to his mistake-prone self. Garoppolo doesn’t belong in any fantasy lineups after his ugly showing on Sunday Night Football. Marcus Mariota (15.56 points) was the other “sleeper” for Week 3 and he showed once again that he can be a reliable fantasy option. Mariota found the end zone in the air and on his feet, and if he continues to do so, his fantasy value will continue to rank in the top-15 of quarterbacks.

Geno Smith (vs. Lions): A solid Week 3 performance from Smith is enough for me to overlook a rough Week 2 and consider him a “sleeper.” On top of that, Smith was on his game in Week 1 and has managed to be an efficient passer in all three games this season. The question surrounding Smith is if he’ll be able to find the end zone, but it seems as if he is connecting with star wide receiver D.K. Metcalf more often. This growing relationship will directly correlate to more production from Smith, and his Week 4 opponent won’t do much to stop Smith and Metcalf from scoring. The Lions have allowed 31 points per game this season, so what’s stopping Smith from pouring it on them too?

Trevor Lawrence (vs. Eagles): This may feel like deja vu seeing Lawrence’s name listed as a “sleeper.” The young quarterback out of Jacksonville was one of my “sleeper” picks for Week 1 of the season, and he has only gotten better since his opening game against Washington. It’s especially encouraging that Washington has been his easiest opponent of the year, but he performed better in Week 2 and 3 against tougher teams. He is still available in 50% of ESPN fantasy leagues, and is one more solid performance away from not being considered a “sleeper.” Pick him up now, because once he’s been picked up in the majority of leagues, I don’t see him being available again.

Sit or Start: It would be unfair to place the blame on Matthew Stafford for the Rams’ slow start, but he hasn’t been his regular self in the first three weeks of the season. Interceptions have been a problem for him, and his overall lack of production has held the reigning Super Bowl champs back a bit. It would be wise to give Stafford a break in Week 4, and see if he can get back on track on the road in San Francisco.

Last week I picked Raheem Mostert (1.1 points) to be a “sleeper” since he was splitting the action with teammate Chase Edmonds. Once again, the two split playing time nearly 50-50, but Edmonds was far more effective. Mostert couldn’t get anything going on the plays he was involved in, and this resulted in Edmonds scoring twice. It’s still worth keeping Mostert on your bench in case Edmonds gets injured. Mostert wasn’t the only “sleeper” running back in Week 3 that had a disappointing week. Darrell Williams (0.7 points) had an awful Week 3 after showing signs of being a point producer in Week 2. After Williams’ teammate James Conner went down with injury, many fantasy managers expected Williams’ workload to increase. This was not the case as Williams was only given the ball once.

Alexander Mattison (vs. Saints): Another star player has gone down with an injury, Minnesota running back Dalvin Cook. This isn’t Cook’s first time being out for an extended period of time, and it’s also not his teammate Alexander Mattison’s first time filling in for Cook. We’ve seen Mattison shine when filling in for Cook, and there’s no reason to believe he won’t shine once again. Mattison scored in the final quarter of the Vikings’ Week 3 game, and he’ll have more than enough opportunities in Week 4 to score some more. He’s available in 63% of ESPN leagues, so pick him up for your flex position until Cook is healthy.

Jamaal Williams (vs. Seahawks): Not surprisingly, Williams is another beneficiary of a player getting hurt. Williams typically receives less touches than his teammate D’Andre Swift, but when Swift left the game with an injury, Williams had a field day. He has a favorable matchup against a weak Seattle defense in Week 4, and there is a good chance Swift won’t be expected to carry as heavy a workload as usual. The Lions will turn to Williams more often than before, and these favorable circumstances make Williams a potential flex option.

Sit or Start: This week in the running back category, not many backs are clear choices to sit. Keep an eye on players such as Dalvin Cook, David Montgomery and D’Andre Swift since they all left their games with injuries and could potentially have lighter workloads in Week 4. If it is reported that they won’t be used as much, it would be wise to keep them on the bench. A “must-start” option for Week 4 is rookie Dameon Pierce. He was one of my picks for “sleeper” in Week 1, and Pierce finally found the end zone in Week 3. His increased production is encouraging to see, and now that the rookie is becoming comfortable in the NFL, it is time to put him in your lineup.

A 30-point performance in Week 2 placed some high expectations on Garrett Wilson (12 points) for Week 3. His 12-point performance was more typical for the young receiver, but still nothing to be ashamed of. He was targeted 10 times in Week 3, and his production is expected to remain high, which takes him out of the “sleeper” conversation from here on out. The other “sleeper” for Week 3, Nelson Agholor (4.1 points), wasn’t nearly as effective on the field as Wilson. He was on the field for 75% of the offensive snaps, but was only targeted three times. This stat is obviously discouraging, and with New England’s quarterback down with an injury, Agholor’s value takes a huge hit.

Russell Gage (vs. Chiefs): A once stacked wide receiver core in Tampa Bay was nearly empty heading into Week 3, with Gage really the only receiver for Tom Brady to throw to. Gage shined in the moment, as Brady turned to him throughout the game. There’s a chance receivers such as Mike Evans and Chris Godwin will be back for Tampa in Week 4, but Gage proved to Brady that he is reliable and that may have been enough to earn him more passing targets. Gage is still available in 45% of ESPN leagues, and is worth a pickup if you need receivers.

Zay Jones (vs. Eagles): During his time on the Raiders, Jones received high praise from both players and coaches. He’s now catching passes in Jacksonville, but it appears as if he has begun to find his way on his new team. Jones had a breakout game against the Chargers, catching 10 passes that resulted in him collecting 24.5 fantasy points. Available in 92% of ESPN leagues, Jones is someone who could fill a spot on your bench in case you need a flex in the future if he continues to play at a high level.

Sit or Start: A Week 1 that everyone wants to forget about scared many fantasy managers from putting DeVonta Smith back in their lineups for Week 2. Smith didn’t have a catch in Week 1, but he had 15 catches and a touchdown in his last two games. He has a favorable matchup in Week 4, and the Philadelphia Eagles as a team are on fire. Smith needs to be back in your lineup considering the Eagles may be one of the hottest teams in the league right now.

We just had one of our most injury riddled weeks of the season, and there are still many more to come. With that being said, thank you for tuning into another week of Fantasy Advice. Hopefully your team is still healthy, and if not, maybe one of this week’s “sleepers” can fill in for someone. Stay tuned for next week, as there are still many players across the league on the cusp of having a breakout game.