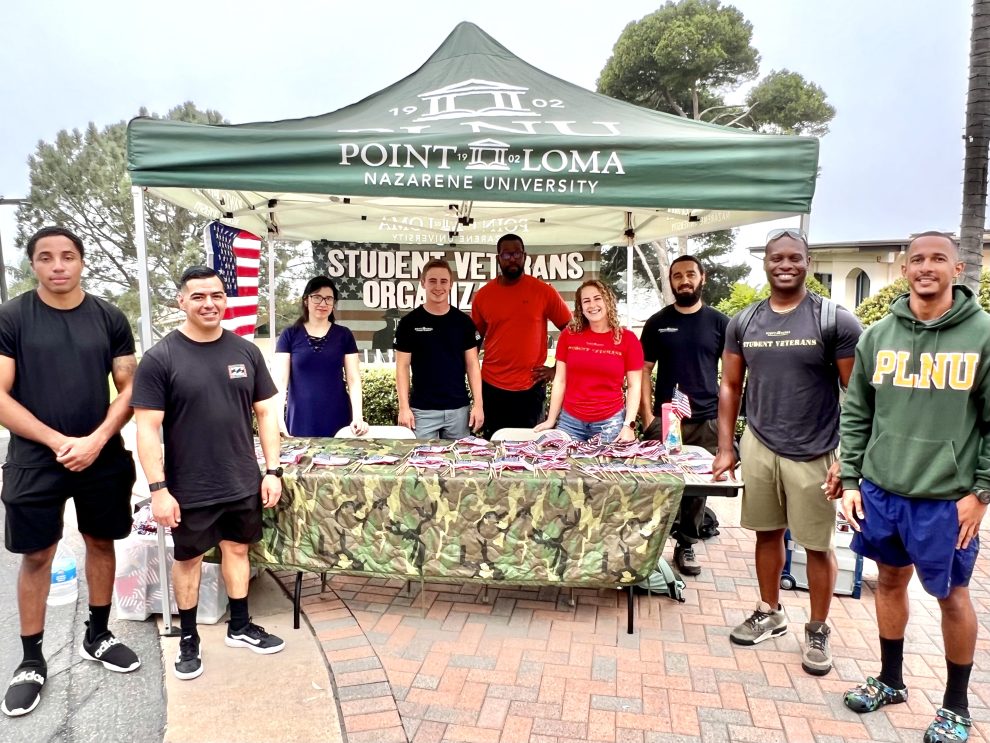 The nation and Point Loma Nazarene University geared up to honor the 21st anniversary of Sept. 11 in the beginning of the ‘22-23 school year. Although the anniversary fell on a Sunday, PLNU’s MIlitary Programs and Services Office and the Student Veterans of America (SVA) honored the anniversary on campus Sept. 12.

“This year, our SVA Chapter conducted a simple tabling event where they engaged with fellow students and handed out small American flags to be placed in the lawn area leading to Golden Gym,” said Thomas Egan, PLNU Military Programs and Services director.

Along with the flag placement, the SVA worked with the PLNU Chapel to invite students to pray for the fallen as well as sending them out to “hug a hero.” One of the leading issuers of this request was senior psychology major Joni Smith, SVA President and former Second Class Petty Officer at PLNU.

“Whether it is someone on active duty or a teacher, [we encouraged them to] go give a current hero a hug,” Smith said.

Many faculty, staff and veterans students remember 9/11, the day bringing back memories for reflection.

Egan was in his 11th year of service as a Navy Seal, stationed at SEAL Team FIVE. He was home with his sick infant daughter that day, watching the news.

“I knew at that point that our nation was under attack and how we operated was going to change going forward,” said Egan. “I called into my command and stood by for further word. We all know what happened from there.”

Smith pitched in. “I remember when 9/11 happened and the sadness around me. Every year I still feel it.”

Egan and Smith both said they feel the repercussions of 9/11 are felt and will be felt for a long time.

“It is important because our lives were so affected by this tragedy and it ripples through family generations,” said Smith.

Many of PLNU’s veteran students remember the event.

“This tragic event was the impetus for many of our students to join the military,” said Egan. “This is powerful because many knew that they were volunteering to possibly be placed in harm’s way. I admire that.”

Egan hopes that all students will remember the significance of this day, the event remaining in our collective memory for as long as Pearl Harbor has.