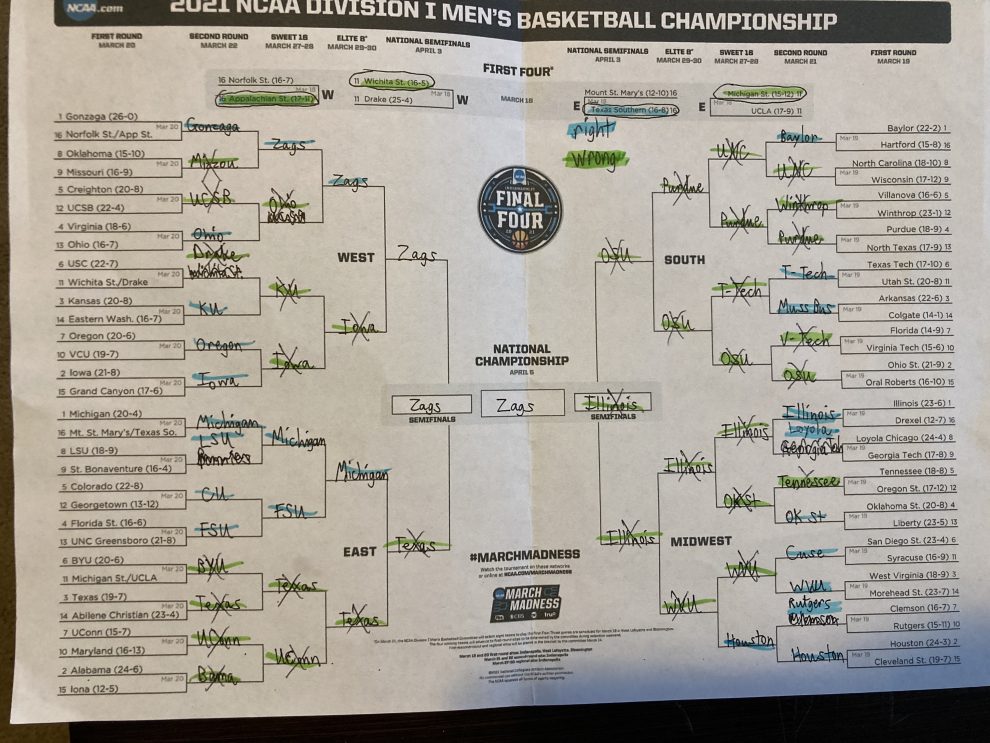 March is such a beautiful time of year. Flowers begin to bloom, and new life sprouts and grows all around in nature. The weather warms up, the sun shines a little brighter and days get longer as spring arrives.

For many people, the arrival of spring signals time to explore the outdoors; for others, March Madness offers hours of entertainment in front of the television. Along with the riveting basketball, the most important part of March Madness is filling out your bracket — a timeless tradition that basketball junkies, casual fans and oblivious bystanders can all enjoy.

It adds excitement to the games to have a rooting interest no matter what you know about the teams, and the allure of picking the perfect bracket draws millions of people to enter their brackets online. Furthermore, many people like myself love to join bracket pools with friends or family to compare brackets and show off our college basketball knowledge. Plus, the bragging rights of winning far surpass any monetary winnings. As someone who won his bracket pool in 2019, I can attest to the rush you feel when you correctly pick the national champion and win your pool as a result.

Without a tournament in 2020, I approached this year’s tournament and my bracket selections with great anticipation. I watched countless hours of games all winter, did my research on any teams I was unfamiliar with and consulted friends and experts in the quest of choosing a perfect bracket, carefully selecting the appropriate balance of favorites and upsets. I felt good about my bracket this year, really good.

What followed was a colossal disappointment.

It started poorly and only got worse. Virginia Tech lost in overtime to Florida in the first game, ruining my perfect bracket from the start. I convinced myself it didn’t matter so long as I didn’t have any of my Elite Eight or Final Four picks get upset in the first round. It isn’t about how you start; it’s about how you finish.

I bounced back and got a couple picks right, but I nervously watched as Oral Roberts hung around with Ohio State, a 15-seed threatening to upset a 2-seed. Now, I love a good upset as much as anybody, but I had Ohio State as a Final Four pick. Therefore, I watched in agony as Oral Roberts made shot after shot, and Ohio State did not. Oral Roberts rose to victory and jubilation; I fell to my floor in defeat and sadness.

I was ready to tear up my bracket then and there. After so much waiting and preparation, my bracket flopped on the first day. I resigned myself to a failed bracket and was ready to sit back and enjoy the rest of the games without worrying.

However, the worst thing happened. I got picks right the rest of Friday, which sounds nice until you realize I talked myself back into having hope for my bracket, holding out that I could battle back to win my bracket pool.

Although Gonzaga, my national champion pick, made it to the Elite Eight and is still alive, my bracket resides in the eighth percentile on ESPN’s Tournament Challenge. As a sports junkie who prides himself on his basketball knowledge, it hurts to put forth such an embarrassing effort. I could make the excuse of being rusty after no tournament last year, being unlucky with matchups or bringing up what a weird college basketball season it was because of coronavirus.

But, I am not going to make those excuses. It is March, and it is madness, and the tournament doesn’t really care how much you know about basketball. Congrats to everyone who has a better bracket than mine, which is pretty much everyone (my parents, my siblings, my girlfriend, my siblings’ wives, all my cousins, my grandparents, probably my neighbor’s eight-year-old son and maybe even someone’s dog).

March signals the birth of so many things, yet this year it brought about the death of my bracket.