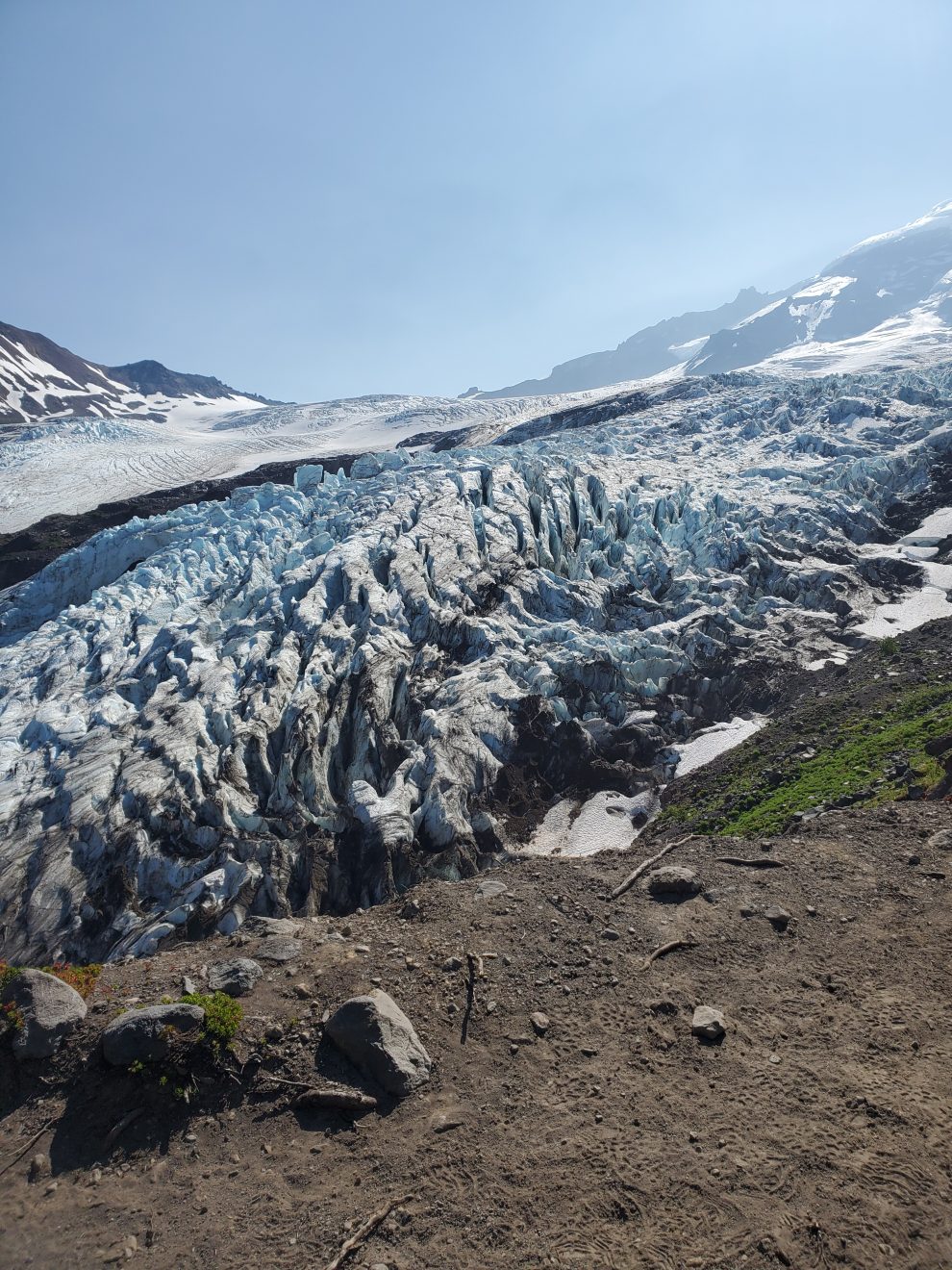 Hiking is an unnecessary activity. It comes from a surplus of time and a desire to travel to a destination while receiving nothing in return. There’s no pot of gold at the end, and the same physical benefits can be achieved by walking to and from destinations where you are required to go. And yet when I was told the activity I had to look forward to for my upcoming stay in Bellingham, Washington, was hiking the Heliotrope Trail, I was excited.

It’s hard to categorize the last challenging part of the hike that stands between hikers and the destination they’ve been working towards. A stream is “a small narrow river.” So, while definitionally a stream does describe the final obstacle of this hike, it leaves much of the important details out.

This stream comes straight from a glacier. The water is so cold your feet will lose feeling moments after entering. The current is strong enough to easily sweep away a child or dog.

As I sat after crossing, trying to regain feeling in my feet, a man with nature themed tattoos and easily a few thousand dollars worth of hiking equipment stared at the stream, shook his head and said, “Your generation’s f—ed.”

Puzzled, amused, and also captivated looking at the powerful stream, I asked “why’s that?”

The tattooed man then went on to explain that the stream is so powerful this year because of the high temperatures Washington has been experiencing. It’s been melting the glacier from where the stream originates. None of this was surprising to learn, nearly everyone is comfortable blaming global warming for anything that seems wrong with the planet. What was surprising was what he said next:

“This is the stuff I learned 20 years ago in school. It’s all happening just like they predicted.”

We knew this was coming for 20 years?

When we reached the end of the trail, pictures were taken of the breath-taking view and PB&Js were munched on.

“Do you guys mind if I read a Psalm? It’s a tradition of mine after finishing a hike,” said Emma McCoy, our guide for this adventure.

From our vantage point on top of a big rock it was easy to see humanity’s collective effort, knowingly or not, have taken a toll on what had once been a massive glacier. It was still beautiful, but the tattooed man’s words resurfaced in my mind:

As you look further down the mountain the glacier goes from thickly layered ice, to scale-like sections which melts back into smaller and smaller layers until it disappears into the dirt it once covered. A paper recently published by Nature reveals the humbling truth that “thinning rates of glaciers outside ice sheet peripheries doubled over the past two decades.”

As I sat taking this all in, McCoy landed on Psalm 10 to read – since the date was the 10th – which opened with:

Hmmm, not quite as fitting as I thought it would be, maybe it’ll come together in the next few verses…

“In his arrogance the wicked man hunts down the weak,
who are caught in the schemes he devises.
He boasts about the cravings of his heart;  he blesses the greedy and reviles the Lord,” (Psalm 10:2-3 NIV).

The rest of the Psalm is the author complaining about how the wicked get away with whatever they want without fear of consequence and the end is an appeal to grant justice to the righteous and oppressed.

I was slightly disappointed after the reading was finished. Not that it was a bad Psalm, but it fit the mood like a flute solo fits in with a heavy metal song.

“What out here could possibly be wicked?” I thought, gazing out in the sea of trees.

The trail isn’t wicked, nor the waterfall. The stream seemed a little malicious, but something that isn’t alive can’t be wicked. The honey badger I saw moments ago seemed more scared than evil.

On our way back down the trail, a woman, probably in her late 20s or early 30s, armed with two hiking sticks, looked timidly at the stream that her husband had just crossed while carrying their dog. She clearly did not want to attempt this despite being about an eighth of a mile from her destination. McCoy encouraged her saying it was worth it to cross since we were on our way back from the end of the hike and knew what she would be missing out on.

I never knew why I liked hiking. I don’t particularly enjoy exercise having to do with cardio, I don’t know a ton of people who call themselves hikers. But as I sat on top of the rock at the end of the trail I realized it was the specific kind of beauty at the end that draws me to hiking. A kind of awe-inspiring grandeur that consumes everything about a person in the moment. It stands in defiance to the encroaching effects of us that inhabit this planet.

An academic article published by the European Geosciences Union used satellite’s and data collected over multiple decades to show how over the course of 23 years the earth has lost 28 trillion tons of ice, 6.1 trillion being from mountain glaciers.

This place, encapsulated by trees and mountains, miles from human civilization, is a bubble of purity.  Heliotrope Trail, the tucked away corner in Bellingham where all this took place, is an unforgettable destination. You’ll see waterfalls so close you can feel the mist as you walk by. There will be a stream that weeds out the committed from the rest. You’ll see a view at the end that no picture can do justice. It’s a place that has been, and hopefully continues to be, nearly untouched by the wickedness of man. But then again, who knows what another 20 years will bring about.